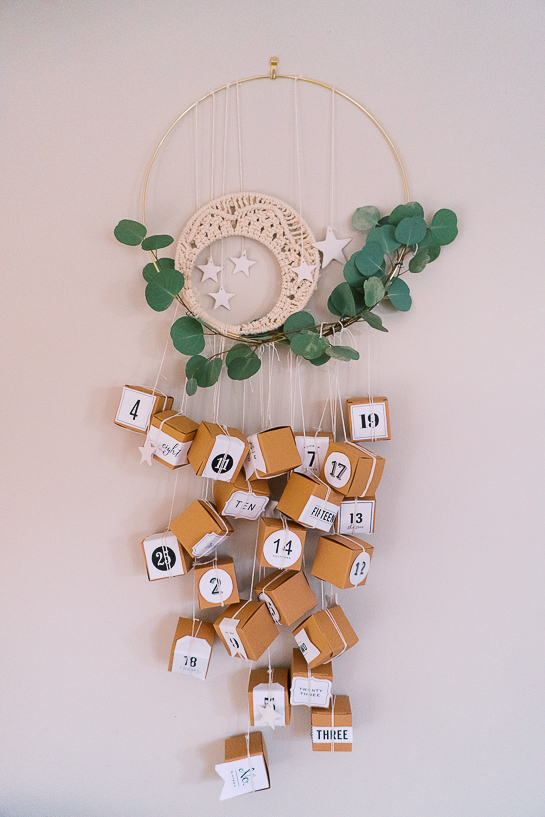 I've recently got obsessed with the process of macrame and can't skip the opportunity to add it to my designs. I've been thinking about some fun ideas to make an advent calendar for my husband this year. Since it's made for a man, I wanted the design to be clean and simple but still cute, so I came up with this Scandinavian-style aesthetic advent calendar with a macrame crescent moon idea. I hope you will enjoy it and it will inspire you to get your hands on macrame!

To choose a design, I looked through a lot of images but couldn't find something that I liked so instead made a simple crescent moon macrame in two rings.

I can't stop saying how therapeutic macrame is and if you haven't tried it yet, you need to get on it! You won't regret it!

I used eucalyptus as a green element of this advent calendar with a macrame crescent moon. It could also look good with evergreen branches but when I used it last year it had a very short life and didn't last for 24 days 🙁 maybe because the heater was blasting near but they dried up and started falling apart 🙁 So since eucalyptus drys nicely, I decided to give it a shot this year😄

I had a 3mm cotton rope on hand for the macrame. When I tried making macrame with it, it looked a bit too bulky so I think 2mm rope would be a barter for this project. I took out one of the threads to make it a bit thinner. Almost in the end I've learned how to reattach it faster. Haha you see, I'm here so you can learn from my mistakes. Simply take one part of the rope and slide the other two down. Boom!

I love the look of this macrame crescent moon but I feel it would look nicer on a larger loop. It feels a bit cramped in places. But because it was a part of an advent calendar, I didn't want it to take away too much space from the composition.

You can downloads the tags here by subscribing and getting access to our Resource Library, full of plans, printables, and other fun stuff.

How to make a macrame crescent moon.

Wrap the rope around both rings. Make sure it's very tight and rings don't move around inside. Use masking tape to tape the ends to your work surface. We will deal with them later.

2. Start working on the small ring. Make Lark's head knots throughout the whole 5" ring. Make sure your thread is at least 4 times longer than the area you'll be working. My first ones ended up a bit on a shorter side and were difficult to tie in the end.

So don't be cheap with the rope, it's better to cut it later than be short 🙂

3. Calculate how many knots you have. I had 20 that I'll use for small triangles and the rest would just tie to the bigger loop.

Spread the knots in preparation for triangles. I used 8 knots in the center to make the big one and to make 2 smaller triangles on the sides I used 6 knots. Group them together.

4. Let's start by making a large triangle in the middle. I feel it's better to start in the middle and make your way to the sides.

Watch my YouTube video to get a better idea, I show in the video step by step how to make all the knots.

5. Take another thread as a guide and finish off the triangle with half hitch knots around the triangle

6. Take the next group of cords (6 knots) and make 3 square knots, continue making them get a triangle. Finish off with half hitch knots.

7. When 3 triangles were finished, I made a few half knots on the next ropes but honestly, if I did it again, I'd rather leave it without. And just tie the ends to the outer loop.

8. Connect all the treads to the larger loop with half hitch knots. Make sure it's not loose, or it will be hanging later.

Put your threads under the big look to make the job easier. When you get to the end, make half hitch knots as well. It might be a bit uncomfortable to work in a tight space but doable.

9. Then I took off the rope that connected two loops in the beginning and made a long loop knot since it looks cleaner and I didn't know what to do with the ends.

10. Then flip it over and let's deal with the ends. It's funny, I never know what to do with loose ends. So I didn't find a better solution than to cut it off and use a hot glue gun to glue the ends that were coming out and seen from the front. It's a back, after all, so doesn't matter if it's pretty or not🤷🏻‍♀️

What do you usually do with the back of the macrame and loose ends? Leave me a comment, I'd like to see if there is a better solution to it.

To tie the macrame crescent moon to the 14" loop I used the same loop knot. Make sure it's at least 2-3" so it's securely connected to your advent. 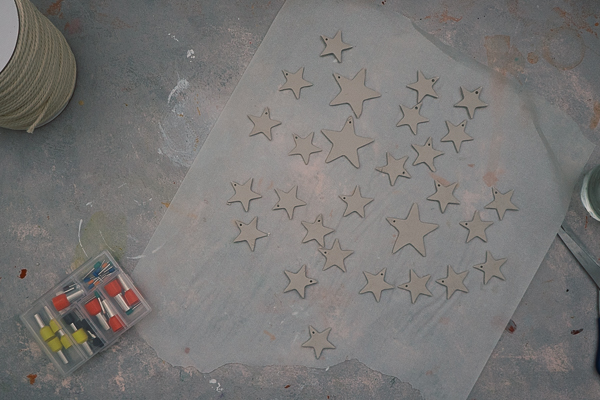 2. How to make stars for this advent calendar

You have a few options on how to make it, or rather what to use as a material.

If you want bright white stars and don't want to paint them, you could make it from salt dough. When it dries it's super white, what I can't say about clay. If you need a salt dough recipe, I wrote it last year here when I made my macaroon Christmas ornaments, oh they are so adorable, check them out!

I went the fastest route and add it from air-dry clay. Well, not the fastest since it has to dry for 24 hours but faster than being bothered by mixing up the salty dough.

I ended up painting the stars white since they weren't white enough and had this graying hint. It didn't look good against my walls.

Take the cookie cutters and make as many stars as you need. I made holes in them but later regretted it since I had to put the thread through all of them when a more simple way would be to glue the thread on the back. In this case, I wouldn't have to worry about holes being seen as well.

I made my stars about ¼" and I feel they could be a bit thicker. So play with it and see what you like most.

My original plan was to add these cute craft pillows, but when I started hanging them, I realized that they look too bulky for the loop of this size. So instead, I got a bunch of 2x2" craft boxes from Amazon and it looked so much better!

I printed out and cut the tags.

Then I used some scrap paper and wrapped it around the pillow boxes.

I tied it to the 14" loop and added eucalyptus on the bottom of the loop.

Isn't it magical? I absolutely love the way it turned out! This advent calendar is so minimalist and natural but gives me all the chills with a macrame crescent moon and stars😍

If you don't feel like making this advent calendar for yourself, I found a similar one that you can purchase from Etsy. It's so gorgeous and I'm sure will look fabulous in your home!

This project is part of the series “The Christmas Craft. Material challenge”. I teamed up with Top Shelf DIY to make projects from different craft mediums (felt, chalkboard, etc.) every week leading up to Christmas.

Check out her beautiful macrame chandelier

Stay tuned for next week. We will come up with decor made from felt. That's exciting 😉 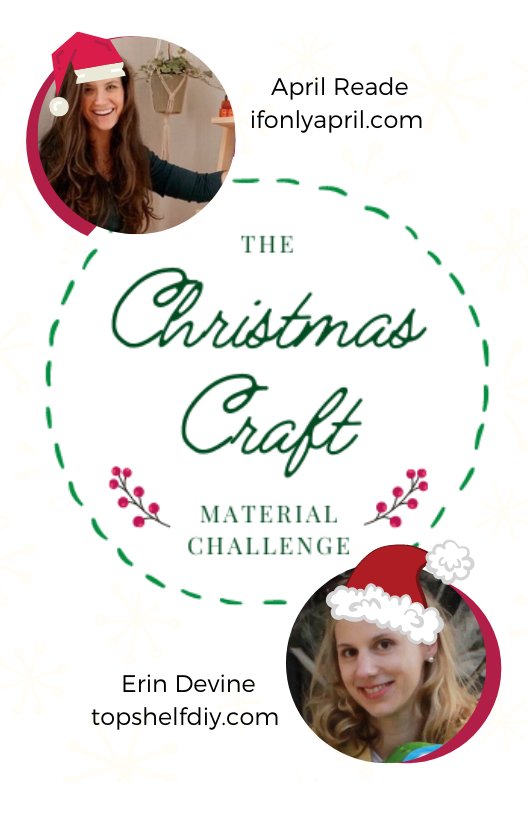 We all love beautiful "before" and "after" room tr

Haha so here is a thing... I'm not sure how often

Haha New Yorkers has seen it all 😅 so who cares

Just something about me 😊 #aboutme #ifonlyapril

Nothing can beat a quick easy and DIY on the budge

Haha I just want to thank me! If I won't do it, no

Yep! Can you tell me where time goes? Along with m

Obsessed with my moody 💙💙💙 library with a